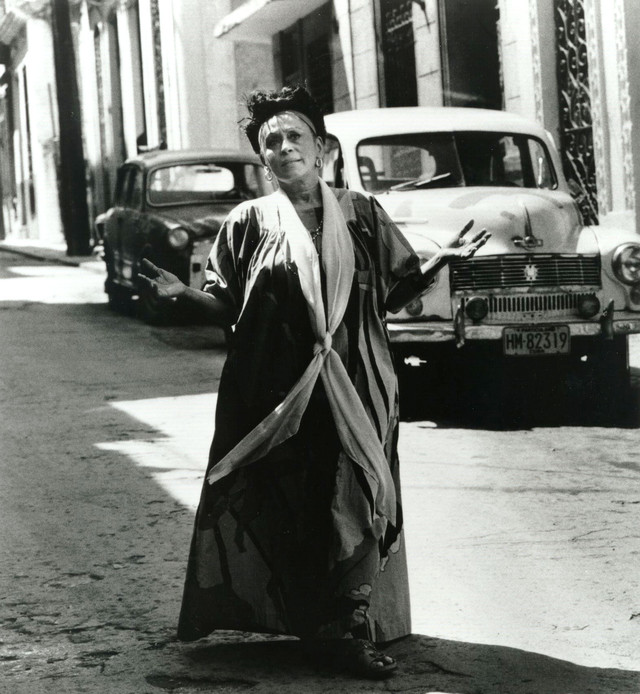 Omara Portuonda is the grand old lady of Cuban music. While her early recordings made her a star in Cuba, her participation in the 1996 album and video documentary, The Buena Vista Social Club, brought her to international attention. Her solo album, The Buena Vista Social Club Presents Omara Portuondo, released in 2000, reinforced her status as one of Cuba's greatest musical ambassadors. A native of Havana, Portuondo was one of three daughters born to a baseball player on the Cuban national team and a woman of Spanish heritage who left the comfort and support of her wealthy family home to marry the man she loved. Her parents' singing provided the soundtrack for her early life. As a youngster, she sang in school choirs and music classes. Heavily influenced by an older sister, Haydee, a dancer at the Tropicana cabaret, Portuondo attended many of the troupe's rehearsals. When the ensemble found itself short one dancer, in 1945, she was recruited to fill the vacancy. The experience launched her on a career as a dancer and she formed a successful partnership with Rolando Espinosa. Portuondo balanced her dancing with singing engagements with friends, including Cesar Portillo De La Luz, Jose Antonio Mendez, and pianist Frank Emilio Flynn, calling themselves Loquimbambla Swing. The group helped to pioneer the filin style of music that blended bossa nova and American jazz. For a while, she also performed with Orquestra Anaconda. In 1952, Portuondo joined with her sister and Elena Burke to form a vocal group, Cuarteto d'Aida. The group's sound was established with the addition of pianist and director Aida Diestro and female vocalist Moraima Secada. Although she released her debut solo album, Magia Negra, in 1959, Portuondo continued to work with the group. Cuarteto d'Aida's fortunes were drastically effected by the Bay of Pigs crisis in 1961. Although they had become frequent performers in Miami, FL, they were prevented from returning as the relationship between Cuba and the United States collapsed. While Portuondo returned to her homeland, continuing to perform with Cuarteto d'Aida until 1967, her sister elected to remain in the United States. Although she performed with Orquestra Aragon in the 1970s, Portuondo had settled into semi-retirement by the mid-'90s. Her plans to slow down her career were altered after Ry Cooder, who was in Cuba recording with the Chieftains, heard her sing in 1995. When he returned, the following year, to produce The Buena Vista Social Club, Portuondo was invited to become a featured vocalist with the all-star group. In 1998, Portuondo recorded a duo album, Desafios, with Cucho Valdes. ~ Craig Harris, Rovi