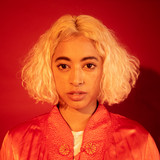 Alternative pop for dreamers.   Red Robyn is a multi-instrumentalist, singer/songwriter born and raised in Durban , South Africa. She is passionate about using music as a medium for creating art that both challenges and encourages listeners to experience music like you would a movie rather than assume the attitude of passive listening.   Red Robyn completed her BA Hons in Music and is currently a Masters candidate. While Red Robyn is notably influenced by jazz and rock, her sound is not one that can be defined as she refers to her work as; 'a mirror that reflects the times'. Red's debut in the music world was in 2016 , for an electronic collaboration with SNVPBACK titled 'Noise'. It achieved widespread airplay premiering on okayafrica.com. Red Robyn has since spent time cultivating her own sound from behind her electric guitar and performed her first festival at Oppikoppi 2018. She made her second festival appearance after winning Afropunk JHB Battle of the bands 2018 and performed on the main stage on the 30th Dec 2018 in JHB alongside international acts such as Thundercat, The Internet and Fying Lotus. She has also shared the stage with Ben Harper, ASA and Beatenberg.