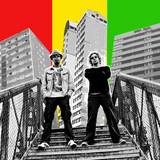 best known for his work as Prince Fatty and productions for with The Skints, Hollie Cook etc etc They also began carving out a reputation as a serious live act playing some of the biggest and best UK festivals from Boomtown to Bestival, performing in Italy. Poland and Montenegro as well as supporting and touring with a myriad of acts including reggae heavyweights Luciano, Mad Professor, Easy All Stars and also performing regularly for causes close to their hearts such as Love Music Hate Racism and Black History Month. In a review of one of the bands 2019 gigs Final Hours blog described Rebel Control as "Beautifully crafted and extremely tight reggae with a political edge"