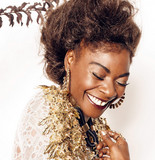 Buika is a critically acclaimed jazz-influenced flamenco fusion singer from Spain who broke through to mainstream success in 2006 with her second solo album, Mi Niña Lola. Born Concha Buika in 1972 in Palma de Mallorca, a city on the Balearic Island of Majorca, Spain, she is the daughter of a political exile from the former Spanish colony Equatorial Guinea, a small country in Africa. Influenced by her mother's love of jazz, she began her singing career in the clubs of Majorca and the neighboring Balearic Island of Ibiza. She also performed in Las Vegas for a while. Buika's commercial recording career began in 2000 with Mestizüo, a little-heard album of vocal jazz standards co-billed to Majorcan pianist Jacob Sureda. Meanwhile, she began appearing as a featured vocalist on various electronic dance music tracks, most notably Smurf & Perry's "Lovin' You" (2001), a club favorite compiled on numerous house music CDs. Ultimately offered a major-label solo recording contract with Dro Atlantic, Buika made her eponymous album debut in 2005. She collaborated with Latin Grammy Award-winning flamenco producer Javier Limón on her follow-up effort, Mi Niña Lola (2006), a breakout album whose stylistic fusion was both critically acclaimed and commercially successful. The album reached number 11 on the Spanish albums chart and sold well in neighboring France, too. Buika collaborated with Limón once again on her next album, Niña de Fuego (2008), a similarly successful album that was nominated for Album of the Year at the Latin Grammy Awards. She broke into the Top Ten of the Spanish albums chart with her next full-length effort, El Último Trago (2009), a collaboration with Cuban pianist Chucho Valdés. Recorded in Cuba with Valdés and a live band, the album is an homage to Mexican singer Chavela Vargas. It won a Latin Grammy in 2010 for Best Traditional Tropical Album. Buika relocated to Miami, Florida in the United States in 2011, the same year her double-disc retrospective En Mi Piel: The Best of Buika was released in the U.S. Following international touring and time off, she re-entered the studio in 2012. She recorded in Madrid, Miami, and New York with her longtime trio (pianist Ivan "Melon" Lewis and percussionist Ramon Porrina) and a large cast of collaborators, including guitarist Pat Metheny. These varied sessions resulted in her most diverse recording, La Noche Más Larga (The Longest Night), which was released in June of 2013. ~ Jason Birchmeier, Rovi