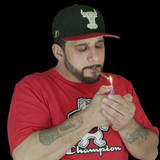 Visit www.PH8Lraps.com Who Am I? For those who grew up during the Golden Era of Hip-Hop, the art and culture left a valuable imprint on the young minds of emcees today. PH8L is one of those emcees, who's Chicago roots infused his soul with the urban culture that now permeates as a pure breed lyricist with extreme mic versatility. "Since 1985" is a testament to the roots that taught and inspired him to be the man and artist he is today.

PH8L's debut EP has a homegrown feel, one that pays homage to the craft of emceeing with honor and respect and is sentimental to the knowledge that empowered his talents. "Since 1985" showcases PH8L as a multifaceted emcee with a range of lyrically diverse topics, beats, and flows. On each track, the Chicagoland native touches on the principles he has fostered as his backbone. Working hard, moving with intelligence, remaining true to the game, and thinking freely are the bare bones of his art form. PH8L flexes his lyrical abilities on classic boom-bap production but also over high energy trap and melodic mellow vibes