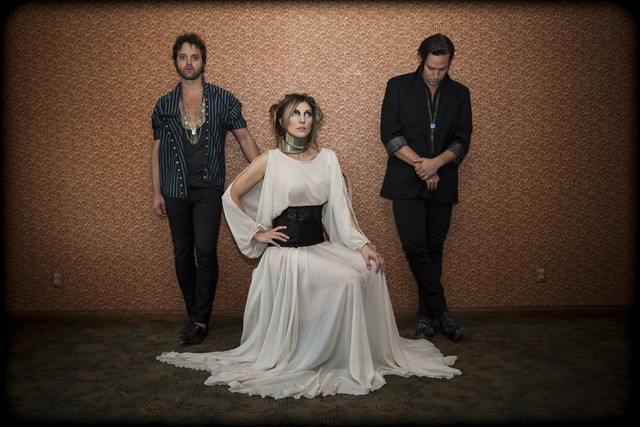 An edgy but commercial indie rock outfit with pop instincts and a theatrical streak, Nico Vega were formed in 2005 by Aja Volkman, a singer and songwriter from Eugene, Oregon who had come to Valencia, California to study acting at the California Institute of the Arts. After a few months, Volkman decided she was more interested in music than acting (she'd been writing songs since she was in high school), so she dropped out of CalArts to focus on her career as a vocalist. After playing a solo gig in Los Angeles, Volkman was approached by Michael Pena, a drummer who dabbled in acting. Pena was impressed with Volkman's style and talent, and teaming with guitarist Rich Koehler, they formed the first edition of Nico Vega. In 2006, the trio released their first EP, Chooseyourwordspoorly, but within a year, Pena left the group as his acting career began to take flight (his subsequent screen credits included The Lincoln Lawyer, End of Watch, American Hustle, and Cesar Chavez). In 2007, Dan Epand became the new drummer for Nico Vega, and the group released two more EPs that year, Cocaine Cooked the Brain and No Child Left Behind. The latter EP became Nico Vega's first release on MySpace Records, a fledgling label started by the people behind the (then) popular social networking site. In 2009, MySpace released the trio's self-titled debut album, which was primarily produced by Tim Edgar, with noted songwriter Linda Perry taking over the controls for three songs. While Nico Vega toured extensively in support, sharing stages with the likes of the Manic Street Preachers, Metric, and Neon Trees, the album's sales were modest, and the group stayed out of the studio until 2011, when they self-released the EP Nico Vega Covers Nico Vega and Rod Stewart. However, in time other media came to the rescue: when Nico Vega's song "Beast" was used in the publicity campaign for the video game Bioshock Infinite in 2013, the track racked up five million plays online, while their cover of Sonny Bono's "Bang Bang (My Baby Shot Me Down)" was used in the 2013 television mini-series Bonnie & Clyde. In 2010, Volkman met Dan Reynolds, who was the leader of a struggling band from Las Vegas called Imagine Dragons; before long, the two would marry, and Imagine Dragons opened a number of shows for Nico Vega. Once Imagine Dragons' debut album Night Visions began climbing the charts, their places on the bill were reversed, but Reynolds would step forward to co-write and produce a catchy tune for Nico Vega, "I Believe (Get Over Yourself)," which would appear on the band's long-awaited second album, 2014's Lead to Light, released by Five Seven Music. ~ Mark Deming, Rovi