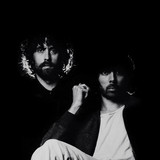 Proving just how all-encompassing the French touch style can be, Justice builds on its vintage funk, disco, and house foundations by adding prog, metal, new wave, indie, and a lot of devil-may-care attitude. Starting with the Grammy-nominated 2007 single "D.A.N.C.E." and that year's full-length † (aka Cross), the Parisian duo defined the brash, stylish, yet tongue-in-cheek appeal of their label, Ed Banger Records, in the mid- to late 2000s. From there, their music only grew bolder and more unexpected. They cranked up the riffs on 2011's Audio, Video, Disco, collaborated with the London Contemporary Orchestra on 2016's Woman and mashed up their own songs on 2018's Grammy-winning Woman Worldwide. With every release, Justice have reimagined the genre-bending possibilities of a world where all music is available to hear -- and recombine -- in an instant. Justice's Gaspard Augé and Xavier de Rosnay began making music in the early 2000s, and first appeared on Musclorvision's Hits Up to You!, a 2003 compilation of songs intended to sound like Eurovision song contest entries. That year, Justice also remixed Simian's "Never Be Alone" for a college radio song contest; Ed Banger signed the duo and released the single, which eventually became popular in England and Germany as well as France. In 2005, Augé and de Rosnay released Justice's debut single, "Waters of Nazareth." During this time, they also established themselves as prolific remixers, reworking songs for artists including N.E.R.D., Britney Spears, Death from Above 1979, Fatboy Slim, Daft Punk, Franz Ferdinand, and Mr. Oizo. Justice's breakthrough arrived in 2007 with the release of "D.A.N.C.E.," a catchy single with an attention-getting video that featured animated T-shirts. The duo's first album, † (aka Cross), appeared that June and incorporated samples from unexpected sources like the Italian prog rock outfit Goblin along with more typical dance music. The album's accolades included nominations for Best Dance Recording for "D.A.N.C.E." and Best Electronic/Dance Album for † at the 50th Grammy Awards. The live album and concert film A Cross the Universe appeared in 2008, and the following year, Justice's remix of MGMT's "Electric Feel" won a Grammy for Best Remixed Recording, Non Classical. Remixes of songs by U2 and Lenny Kravitz, as well as production work on the Birdy Nam Nam song "The Parachute Ending," kept them busy in 2009. Augé and de Rosnay returned in 2011 with their second album, Audio, Video, Disco, which was filled with prog rock sounds, guitars, and plenty of new wave-era influences. They toured extensively, with their second live album, Access All Arenas, released in 2013. Three years later, Justice returned with a pair of singles (July's "Safe and Sound" and September's "Randy") that arrived ahead of the full-length Woman that November. Described by Augé and de Rosnay as their most joyful music yet, the album featured the London Contemporary Orchestra as well as vocalists including Morgan Phalen, Romuald, and Zoot Woman's Johnny Blake. While adapting their songs to tour in support of the album, Justice liked the reworked versions so much that they recorded them in the studio. The results were Woman Worldwide, which Ed Banger and Because Music issued in August 2018. The following February, the album won the Grammy Award for Best Dance/Electronic Album. ~ Jason Birchmeier & Heather Phares, Rovi