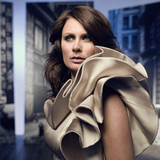 Formerly known as Ian Van Dahl, the Belgian dance outfit who scored several U.K. Top Ten hits in the early 2000s ("Castles in the Sky," "Will I?"), AnnaGrace is essentially a solo vehicle for frontwoman Annemie Coenen (born in Herk-de-Stad, 1978). After two studio efforts, Ace and Lost and Found, she continued to develop her melodic trance-pop sound under her new guise in 2008, and with help from regular producer Peter Luts, scored a Billboard Hot Dance Airplay number one with "You Make Me Feel," and a Top 20 album in her homeland with 2010's Ready to Dare. ~ Jon O'Brien, Rovi