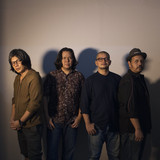 Float is an Indonesian project band led by singer/songwriter/guitarist Hotma "Meng" Roni Simamora. Started in 2004 with Windra "Bontel" Benyamin (guitarist) and Raymond Agus Saputra (bass), the first formation’s independent debut EP “No-Dream Land” (2005) attracted movie producer Mira Lesmana who later asked the band to create the music for her movie “3 Hari Untuk Selamanya” (2007).   Their soundtrack album has won major honors, including the prestigious Abhinaya Trophy for Best Soundtrack at the Jakarta Film Festival and an award for Best Theme Song at the MTV Indonesian Movie Awards, both in the year of 2007.   Their song “Surrender” was featured in a promotional campaign for “Heroes” (season 2), a TV series produced by STAR, a pay satellite television based in Hong Kong. In 2008 “Waltz Musim Pelangi” was released in the compilation album “Songs Inspired by Laskar Pelangi” (Miles Music). The band also contributed their work on the background music and the theme song “Songs of Seasons” for Indonesia Tourism Board’s TVC, appointed by Ministry of Tourism and Creative Economy in 2012.   For over a decade, the project band has involved many “contributors” in, both, their studio works and live performances. The revolving lineup has influenced the band’s musical style that has grown from a mix of pop, rock, blues, and jazz. Supporting Meng with each of their roles, Timur Segara (drums), David Qlintang (guitar), and Binsar Tobing (bass) make the latest Float’s four-piece formation.