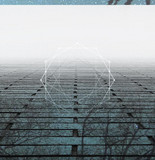 It's not often that you hear bass music as tranquil as the soundscapes of Krstos . The nomadic DJ and producer's near decade of travel has translated into an eclectic discography indeed, but all of his songs exhibit an instantly recognizable harmony between individual sonic elements. The highs meet the lows in each of his complex and emotionally rich arrangements much like ocean waves meet with the shore. Having put genres like trap, dubstep and future bass through his own unique creative filter, he now boasts releases through Bay Area imprints like Street Ritual and MalLabel as well as Melbourne, Australia-based Adapted Records. The impressive range of sound Krstos is capable of producing is also due to the wide array of artists that have directly influenced him. Born Christopher Hicks in Houston, Texas, he owes his earliest musical experiences to his godfather, Doug Pinnick , who was the bassist and lead singer of the metal band King's X . At the age of 17 he moved in with his actual genetic father, who played a crucial role in his spiritual awakening by teaching him about medicine bowl sound healing. Four years later, the two of them relocated to Tucson, Arizona. Once he was old enough to leave home, however, Krstos set off to explore the West Coast like a gypsy - as he continues to through today. In the early years he traveled with little more than a laptop and cast-iron skillet in a backpack.   https://krstos.com/   https://www.instagram.com/krstosmusic/