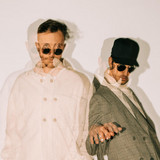 Flight School is the merging of Canadian-born, Los Angeles-based DJ/producer duo Guillaume Viau and Conor Cutz, and they are quickly becoming this year's break-out act. With their deep history in turntablism and experience working with high-profile brands such as Spotify, Louis Vuitton, Hermès, and Bumble, Flight School is primed to be next up. They are setting themselves apart with their sharp understanding of music and unmatched ability in merging genres. Their debut single ‘Figure It Out’ earned the highest debut on Canada Top 40 radio since 2016, and received support from the likes of industry heavyweights The Chainsmokers and Lost Kings. This caused them to top the Shazam charts & earn the title of iHeartRadio’s Future Stars. In addition, it was Apple Music's #1 track in their ‘Breakout Dance' playlist and the single is currently listed across various top Spotify playlists. All of this has the industry and fans alike eagerly anticipating what’s next.