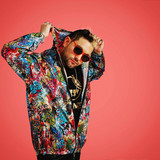 BEMET is the alter ego of the Israeli phenomenon electronic artist - Hod Moshonov. Under the BEMET moniker, Hod has been steadily building momentum over the last two years, developing his unique sound signature while supporting the enormous Major Lazer, collaborating with artists like the dubstep sensation Borgore, and recording and arranging for Assaf Avidan's latest gold album "Gold shadow". As a precious jazz talent from early childhood, Hod was awarded a full scholarship at Berklee College of Music aged 18 as well as being personally considered to Grammy 58th nomination for the best contemporary instrumental album as a producer for the Dor Assraf instrumental album, and was immortalised by the New York Times for his performance on the Monk institute Jazz competition when he was 22 years old. BEMET's live show is an explosion of light and sound, playing on his custom made Key-tar , an instrument he is single handedly returning from its 80’s purgatory. BEMET was discovered by the Indian audience on 2016 after a remake he made for ‘Mumbai Dance’ by the huge Indian DJ artist Nucleya, which became a net sensation. On October 2017 BEMET released his first single/ video – ‘Sababa’, directed to his massive Indian audience. The video was shot in India during BEMET’s India tour on summer 2017 and got great reviews on the “Times of India“ and the well known EDM magazine ‘Grapevine’.