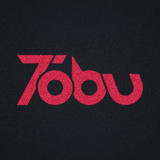 Latvian electronic music producer Tobu, in full name Toms Burkovskis, is known for his addictive melodies and positive energy his music gives to listeners. A vast majority of his songs are instrumentals. He's proved that no vocals are always needed, because his tracks stay interesting and fun even without them. Songs like "Candyland", "Hope", "Infectious" and "Colors" has accumulated countless millions of streams and views on YouTube, and they have been widely used by content creators all over the globe. Big chances are that you have heard them before. Before Tobu got into music, he was a freelance web developer and started doing music production as a hobby in 2010. He was always interested in music and musical instruments as a kid. He's always loved upbeat and syrupy melodies in music. Tobu doesn't have any musical education, however, over time, self-taught Latvian has found his way to understand, which piano keys and combinations sound good together and that has helped him a lot with improvising and coming up with his own melodies. He was heavely inspired by Avicii and deadmau5 back at that time, when he started to make his own music. Uploading track after track on SoundCloud and YouTube, getting support from fans and encouraging him to keep going, he got lot of support from promotional channels and was soon discovered by NCS (NoCopyrightSounds) in 2013, when they released lot of his music with huge success.