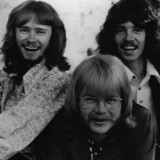 Developing a style that crossed over between country and light commercial pop, Lisle personified the MOR radio format. The band was formed in the late 1960s by Barrie, Ontario natives Bill Chambers on guitars and lead vocals, bassist Brian Mathias, and drummer Dan Stephens. For their first few years on the Ontario bar circuit, they covered the established hits. Playing an average of six nights per week, they became a regular fixture in places like Pembroke, Renfrew, Orillia, and Peterborough. The band signed with Bud Crosgrey's Bronco Records in 1972, with distribution by London Records in Canada and Bell in the US. They released You're Why Baby as a single backed with Goin' Away (an old tune by The Fireballs) that year. When the single peaked at #31 on the Canadian MOR/Adult Contemporary chart, they discovered that several DJs had begun playing the b-side as well. They released their debut album Smile With Lisle in the fall of 1973. Recorded at Captain Audio Studios in Yorkville, the album was predominantly covers. Lisle's version of the Bee Gees' Sweetheart went on to spend 20 weeks on the Canadian country chart. The band found their biggest success in 1974 with the single Shelly Made Me Smile. Backed with the Elton John cover Your Song, the single spent 19 weeks on the Canadian charts, peaking at #28. Shelly Made Me Smile appeared on several compilation albums over the years, and became an AM radio MOR staple in the process.