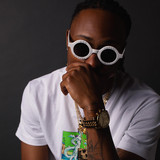 was born in St. Thomas U.S. Virgin Islands within the Hidden Valley (Ras Valley) neighborhood. He fought his way out of the hood thanks to his parents who showed him that you must strive in life and put in the work for what you desire. Bongie’s childhood friend "Tigre" was the one that told Bongie to pick up a pen and start writing down what comes to his mind. This made him realize all that he needed to realize and ever since then he had a burning passion for music, accompanied by the influence from his older brother whose been making music. Bongie approaches beats with fierceness and intensity. His style is akin to the likes of Lil’ Wayne, who had an heavy impression on him in his early teens and in which he accounts for his all around creativeness. He also borrows his tone from the likes of Future, Gunna and Young Thug. Bongie Tha Yung’N started his musical appearance in the beginning of 2017 shortly after relocating to San Diego and decided to take music seriously. Thereon he has went ahead to release 5 singles that came with music videos and also a 14-track original project entitled "Hear Me Now", which has led him to accumulate an increased following that has allowed him to perform shows in San Diego and Los Angeles. He recently released his latest single on July 30, 2020 entitled “Finesse”.