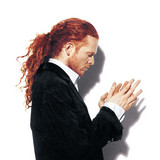 Hucknall was a Manchester art student when he saw the Sex Pistols at the city’s Free Trade Hall in 1976, one of the few people who can legitimately claim to have been at the concert that gave birth to the Manchester punk rock scene. It was Hucknall’s own punk band, the Frantic Elevators, that recorded the original version of Holding Back The Years, but Hucknall was too much of a melody-loving soul to be a three-chord wonder for long, and in 1985 Simply Red were born. “For me, music has to be instinctive,” says Hucknall, on the soulful direction his band took. “It’s why I rejected the academia of being an art student: I knew that I had to make something that gets to people without their knowing why. Above all I have an obsession with melody, which I inherited through my love of the Beatles. All I’ve ever really wanted to do is to create melodies that are simple but refined. I’m evangelical about it: music takes you to a place that nothing else can take you to and it’s my job to contribute to that.” It’s the reason why Simply Red, despite their longevity, despite a following that has seen them sell 60 million albums, have never fitted in or been defined by a trend or movement. It has helped give the music a timeless quality that has seen the band have top ten hits through the 80s, 90s and 2000s.<br>