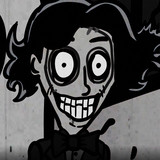 The rapper who cut his face off. Marshal Manson Is an American singer, songwriter, producer, rapper, and online content creator from Marietta, Georgia. In 2018 Manson acquired a cult following after his breakout into the podcasting community of Youtube with his song "Salty Paul" that quickly amassed over 100,000 streams on the site, and led to his live debut at The Mint in Los Angeles. Since then he's been producing music for a laundry list of creators including podcasters, cartoonists, comedians, ranters, speedrunners, and more.

In addition to his collaborative projects Manson has released his debut album "I Hate Everyone". The album was met with great reception for it's honest looks into resentment, frustrations with the world, social anxiety, and eventual acceptance of the human condition. The songs on IHE are laden with double meanings and shifts in perception that audiences identified with and took comfort in. In 2021 Marshal Manson dropped his first official music video for the Nu-Metal/Trap infused song "Never Loyal" off of his second album "I Hate Myself", in which he cuts his face off and confronts his demon Nickelwise. Though hard to look at, the video displays positive messages about picking yourself up and starting again after a traumatic experience. This video began the second era of Marshal Manson as he continues to make music for the excluded and hurt people of the world to this day.