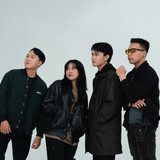 A four-piece alt-pop/alt-rock band from Vietnam, heavily influenced by both J-Rock and Britpop culture. Formed on 23rd November, 2018 by Hoài Thân and former members Văn Hiển, Kỷ Nguyên. In early 2021, the band completed the lineup with Hoài Thân (Vo/Gt), Hữu Thiện (Gt), Quỳnh My (Ba) and Lê Sinh (Dr). "PiCK" was their first EP - contained four songs written in English, released in 2019 by former members. By the end of the year, Hiển and Nguyên left to follow their own paths. In 2020, Hữu Thiện was the first to join the band, along with Hoài Thân, they made their major debut with the very first album "Rừng Đom Đóm" in 2021, which marked an important milestone for the band. Quỳnh My and Lê Sinh joined the band at the same time then. 3 years since The Cassette was formed, they've shown their feelings, passion, and growth as a band.