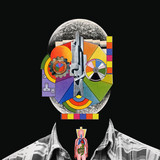 A Wolverhampton, England-based production duo, Letherette is the project of Andy Harber and Richard Roberts, who form and fuse house, electro, and hip-hop into a stylish whole that at times recalls the work of Dilla and Daft Punk. After becoming friends at age 11 and going to college together, the pair began recording tracks as Letherette in 2003. Part of the Artists' Valley collective, which also counts Bibio's Stephen Wilkinson as a member, Harber and Roberts released the first two Letherette EPs on Alexander Nut's Hotep imprint in 2010 and 2011 respectively, then signed to Ninja Tune. Around that time, they also made mixes for BTS Radio and remixes for Bibio and Machinedrum. The duo's Ninja Tune debut, the Featurette EP, arrived in 2012, and their self-titled debut album appeared in April 2013. Harber and Roberts delved deeper into hip-hop and downtempo on 2016's Last Night on the Planet, which featured collaborations with rappers Rejjie Snow and Pyramid Vritra and the folktronic duo Jed and Lucia. ~ Heather Phares, Rovi