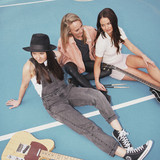 Whether jamming together on their family farm in the Adelaide Hills, playing alongside Arcade Fire at the Isle of Wight festival, or opening UK stadium shows for Little Mix, it’s their mutual connection to music that has seen sisters Georgia (guitar, keys), Ella (bass, electric cello) and Clara Germein (drums) make their mark in music while staying under the radar… until now. The indie pop trio are making a statement with their bold new single ‘Good For A Girl’ which they wrote, recorded, and produced themselves in their home studio. ‘Good For A Girl’ touches on the siblings’ personal challenges they’ve faced being an all-female band in today’s music industry. Clara laughs, “I went into a music shop to buy drumsticks, and the guy behind the desk asked me if I was buying them for my boyfriend”. Georgia recalls the band’s first soundcheck on a national tour when “It was as if we’d surprised the sound guy when we started playing, like he expected us to be bad. At the end of the show he said to us that we were actually pretty good for girls”. “We wanted to write a song that would help tackle these stereotypes, and give a voice to anyone who might be going through a similar experience” says Ella. “It’s about giving girls an equal playing field, and not discriminating based on gender” Clara adds. The song’s powerful lyrics are blended with the raw combination of edgy guitar hooks, quirky piano lines, and rhythmic vocal percussion – topped off with haunting sibling harmonies.