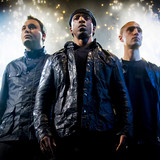 Drum & Bass would not be the same without Drumsound & Bassline Smith (aka Andy Wright, Benjamin Wiggett and Simon Bassline Smith). Together the trio have body-slammed dancefloors from Derby to Durban and established themselves as three of the finest Drum & Bass tastemakers on the planet, courtesy of the blue chip label Technique Recordings – an imprint that celebrated 18 years of killer dancefloor joints in 2017     Their third LP, is like a gallery exhibit of the many facets of Drumsound & Bassline

Smith. Their past, their present, and maybe their future, is laid out in intricate detail and with the sheen of sheer production class which marks them out from the crowd. Every tune on this album tells a chapter of their story while simultaneously being a straight-up banger. There aren't many producers who could pull that off, but this is Drumsound & Bassline Smith were talking about here. So, of course they can.   http://drumsoundandbasslinesmith.com