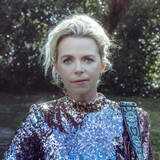 Born in Newton, Massachusetts to an Irish father, Aoife O'Donovan is recognized for her ethereal voice and substantive songwriting. Called “a vocalist of unerring instinct” by the New York Times, the Grammy award-winning musician has released two studio albums In the Magic Hour (2016), a 10-song album full of the singer’s honeyed vocals mixed with gauzy, frictionless sounds and her debut solo album, Fossils (2013), a moody collection of original songs with a country lilt. In 2018, Aoife contributed an original song Are You There to the film 'What They Had', an official selection at both Sundance and Toronto Film Festivals. March 2020 brought her newest recording project and first with a string quartet, Bull Frogs Croon (and Other Songs).   Also known for her collaborations, O'Donovan is 1/3 of the Grammy-winning folk trio I'm With Her with bandmates Sara Watkins and Sarah Jarosz, the featured vocalist on The Goat Rodeo Sessions with Yo-Yo Ma, Chris Thile, Edgar Meyer and Stuart Duncan, and the co-founder and vocalist for the seminal bluegrass string band Crooked Still.   Aoife uses she/her pronouns