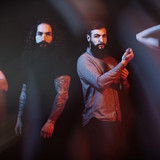 Featuring Got No Ego

Got No Ego is a band from Northern Italy, whose first steps have been taken in 2011. Over the last few years these guys have been performing alongside many established international acts such as Whitechapel, Betraying the Martyrs, Napoleon, Skyharbor and Polaris just to name a few. The upcoming full-length “Reflection” is the result of several years of hard work and dedication by this four-piece, and it features 10 brand new tracks produced by Ralph Salati (Destrage). The blending between aggressive and fast riffs & intense clean vocals marks a further evolution in the band’s sonic sphere – now enriched by several synth layers which perfectly round up their sound, providing great melodies and atmospheres. Lirically speaking, the album treats introspective themes described through approaching peculiar circumstances – mostly personal and social situations – and also universal emotions and experiences we all go through. Accomplishing the path with an inner evolution or the acceptance of the outcome of our choices.