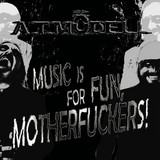 In 2009, after many years of enjoying other bands' works, Rumi and Líyak decided to create their own music too, akin to their tastes and having in mind to be original in its approach. The first songs saw the light under that premise, and then, refining and selecting them by their characteristics, one of the traits achieved that searched industrialish sound, coagulating in this project called A.T.Mödell. The first album ("Noise Therapy"), was published on Nov 2011, and the next album, "Apocalyptophilia", released on 24th May 2013. The third album, "Wired for evil", released on 1st October 2014, delivered the sound that A.T.Mödell was looking for in its very conception: hard, dark, powerful and very, very enjoyable, deepening well into dark electro-metal style. This kind of composition did not left them while they have composed the 4th, "Epic Nightmares" (30th October 2015), achieving their strongest and most complex sound up to that date. Their newest album, "Music is for fun, motherfuckers!", takes all the notions from the previous ones further and beyond, squeezing the metal and electro-industrial fusion out to achieve pieces with dramatic and astounding rythms and passages, and at the same time carrying ideas to the opposite to deliver a full-blown raw synth explosion not extent of motivation and tongue-in-cheek performance, this time without central concept except the one of its title: a strong vindication and determination to show that music, after all, is for fun.