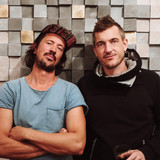 CMC and Silenta started producing together after they had a couple of successful solo careers. CMC started out his career in live hip-hop bands, but found himself more drawn to the role of the band’s DJs. With that in mind, he quit the band and purchased a bunch of vinyl and taught himself the craft of DJing. Silenta had a similar situation happen. When he was just a teenager learning how to play the piano, Silenta quit the piano lessons after being exposed to a Technics Workstation. Around that time, the two met and recorded their first tunes. They have a no restrictions attitude, which makes it hard (and fun!) to try to predict what they’re going to release next. Regarding the game of production, CMC has stated that “Making music challenges you to put your mental ideas into real sound.”