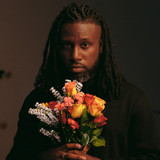 London born and raised Aaron Taylor never planned on being a star. He had envisioned a life in music, but one in which he’d produce, write for and play with other artists. However, the brilliant songs he was writing kept on stacking up and soon there were more than he knew what to do with. “So I thought I might as well just sing them myself and get them out there", he says. Almost instantly the first of Taylor’s solo tracks, ‘Lesson Learnt’, was picked up by Apple and used globally in one of their adverts, giving him the confidence to properly go it alone. Since then he’s developed a thrillingly diverse, dedicated fanbase, with support from Rinse FM to BBC 6Music and co-signs from tastemakers Annie Mac, Gilles Peterson and Mistajam. Even Elton John has featured Taylor on his eclectic Beats1 show. “My loftiest ambition is to win a Grammy,” says Taylor. “I know it sounds cliche, but it’s something I’ve wanted since I was a kid.” As flights of fancy go, on the basis of his debut album ICARUS, it’s a dream that’s definitely got wings.