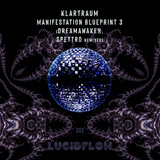 http://klartraum-music.com/ KLARTRAUM [Lucidflow, Soma, Darkroom Dubs] played live at Fabric London UK, Circoloco @ DC10 Ibiza, Tresor Berlin Germany, Lightning In a Bottle Festival California USA, Kazantip Ukraine, Brown Alley Melbourne Australia, Shanti Goa India… Silhouetted against the RGB pulse of the club lighting rig you see two figures in the DJ booth – one female, bouncing with effervescent energy and feeding off the buzz from the dancefloor, and one male, working the controls with the subdued calm of a Zen master. From the speakers comes the expected throb, but something is different. Rather than formulaic kick-hat-snare metronome, it is as if a widescreen switch has been flipped, the periphery of your hearing being licked with unknown sound waves that had been criminally absent from your night. You are listening to Klartraum. Berlin based duo Nadja Lind and Helmut Ebritsch have been crafting audio under the Klartraum banner since 2006 and co-run the much admired Lucidflow label, notching up admirers such as progressive icon Hernan Catteneo, French techno legend Laurent Garnier, figurehead of deep Seth Troxler, legendary techno outfit Slam and one of the musical directors of Fabric in the shape of Terry Francis. The list of Klartraum EP’s and two studio albums – Evolution and Secret Moon – come hand in hand with wave upon wave of plaudits from the scene’s leading names. klartraum fabric london terry francis (continue reading http://klartraum-music.com/)