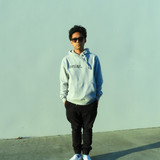 Eric Jordan, better known by his stage name Emassin, Bay Area born and raised and 1/5th of the underground crew ELEMNOP, is a Filipino-American rapper, artist, poet and writer but mostly identifies with being an emcee.   Influenced by Hip-Hop music from the late 80’s/90’s, Sufi poetry and literature from the Jazz Age, Emassin boasts complex rhyme patterns integrated with spirituality, vivid storytelling and undertones of anti-Eurocentric social awareness.   Emassin credits his 20 years of advocacy and activism work to his dynamic and potent content. Making tracks with producers such as Arndroid, CeeRock and Dex Beats elevated his songs onto an international platform. Despite being somewhat unnoticed in the galaxy of Hip-Hop, Emassin is no newbie to curating music.   With over a dozen albums under his belt throughout the span of a decade and a half there seems to be no shortage of music by Emassin as he and producer Arndroid continue to drop project after project.