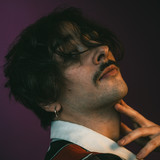 Mattia Prete is a DJ, Producer and Live Performer based in Berlin. He runs his own parties, has his own studio and manages two forward thinking labels: aurora., which builds bridges between scenes and sounds all over Europe, and Jazz-O-Tech, which fuses jazz experimentation with techno soul into fresh new sounds by artists like Tensal, Gianluca Petrella, Fabrizio Rat, Sunil Sharpe. As DJ, he has toured Europe's finest from Tresor and Griessmuhle in Berlin, to Street Party Pristina in Kosovo, Lärm in Budapest and Moog Club in Barcelona, releasing music alongside techno legends like Stanislav Tolkachev, Oscar Mulero, Shxcxchcxsh, Umwelt

Mattia Prete’s music always shows a subtle evolution in his style, from deep to diving, dreamy to dark, adding to that a love of sci-fi futurism and the immersive, expansive nature of film soundtrack, . Transforming emotions and subverting expectations is what Mattia Prete does best, and he's only just getting started.