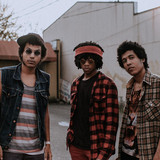 Garage punk trio Radkey were formed in St. Joseph, Missouri in 2010 by brothers Dee, Isaiah, and Solomon Radke, who grew up listening to their music-mad father's vast collection of punk, rock, and metal records. The band was formed after Isaiah lent Dee his bass guitar so he could play in a local covers band. Seeing his brother on-stage, Isaiah decided that he wanted in on the action; youngest brother Solomon also expressed an interest and took up drumming, and Radkey were born. After rehearsing in their bedroom for months, they got early breaks when, for their very first gig, they managed to bag a support slot with '90s funk-metal pioneers Fishbone, and got the opportunity to record their first EP, Cat & Mouse, in New York at Wreckroom, the studio owned by Entourage star Adrian Grenier. Produced by the Giraffes' Damien Paris, the EP, released in 2012, generated significant Internet buzz, and the band went on to play a number of high-profile shows, including the Afro-Punk Festival, South by Southwest, and Chicago's Riot Fest. While initially attracting attention for the novelty of their being black, once they got up on-stage and started to rock, any trivial considerations were forgotten; Dee's vocal similarity to a young Glenn Danzig and Isaiah's remarkable resemblance to Phil Lynott probably didn't hurt either. To promote their second EP, 2013's Devil Fruit, they crossed the pond to play at the U.K.'s Download Festival and appeared on the BBC's Later with Jools Holland. By this point, they were getting so popular that their father quit his job as a loss-prevention officer at Wal-Mart to become their full-time manager. Recorded in San Francisco, California and Sheffield, England with producer Ross Orton (Arctic Monkeys, the Fall, Jarvis Cocker), the band's much-anticipated debut album, Dark Black Makeup, arrived in the summer of 2015. The following year, Another Century Records reissued it with bonus tracks under the title Delicious Rock Noise. ~ John D. Buchanan, Rovi