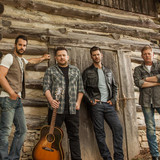 Emerson Drive has been a part of the country music scene since they signed their first record deal with DreamWorks Records Nashville in 2001. The band's first two singles, "I Should Be Sleeping" and "Fall Into Me," peaked in the Top 5 on the Billboard charts and quickly became fan favorites but it was the career-changing song "Moments" that gave the band their first #1 single in the USA. Emerson Drive has been honored with awards and/or nominations from the Academy of Country Music, Country Music Association, Canadian Country Music Association, CMT, Dove Awards, Grammy Awards, Inspirational Country Music Association, Juno Awards, Music Row Magazine and Campus Activities Magazine. The band has toured with Toby Keith, Shania Twain and Big & Rich among other artists