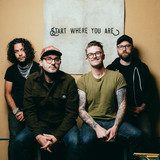 Into It. Over It.

Featuring Into It. Over It.

The recording project of Chicago-based songwriter Evan Weiss, Into It. Over It. finds the prolific emo-pop veteran of numerous bands (The Progress, Pet Symmetry, Their / They're / There, Couplet, Stay Ahead Of The Weather, Up Up Down Down.. and more) striking out on his own. In Into It. Over It., Weiss blends well-crafted pop with a literate, introspective lyrical stance and vocals that acknowledge angst without surrendering to it. Weiss launched Into It. Over It. with 2007's ambitious 52 Weeks project. He has since released countless albums, splits, eps and singles hitting his stride as a composer and arranger with 2013's Intersections, 2016's Standards and most recently 2020's Figure which is Weiss showcasing his strongest and most confident artistry to date.