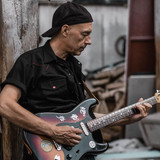 A versatile and eclectic guitarist, Michel Marthaler was influenced from his early beginnings by Steve Hackett, David Gilmour, Eddie Van Halen and Andy Summer. In 1984, he participated in a guitar workshop led by Jack DeJohnette. The closing concert with the famous drummer was a revelation to him, and Michel set off in 1987 to study at the CIM in Paris, a renowned music school. Very quickly, he was noticed by Louis Winsberg who taught him all the facets of jazz, a music he had discovered with his father, a studio drummer. His passion was fueled by the influence of guitarists such as Pat Metheny, Alan Holdsworth and Larry Carlton. Michel has collaborated on numerous albums, including Emmanuel Fratiani’s "September Suite" (1995) and Christophe Chambet’s "The Family" (1998) with Alain Caron and Christophe Godin, among others, thereby consolidating his reputation as a studio musician. "Electric Rendez-Vous", Michel Marthaler's first album, was released in 1997. After a collaboration with Pierre-Luc Vallet (1998), he opened for James Carter and Ravi Coltrane during their tours in Switzerland. In 2002, Michel released "Plug In Jazz", his 2nd album, featuring Bob Harrison on bass, Stefano Saccon on saxophone and Norbert Pfamatter on drums. In 2018, he founded the festival "Générations Music" for young musicians, in Geneva. Michel currently plays with the rock band MTBT.