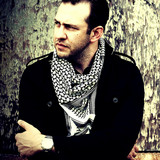 “Clean lines, no replies, stuck up in the haze again,” The opening line from Rotoscope’s new single could standalone as their musical mantra. Conveying the angst that accompanies the exponential growth of technology, the beeps, clicks and whirs of information flow and the fractured sounds of a broken society which seductively swirl around us in this modern age. At the heart of Rotoscope is Charlottesville-based musician John Athayde who has surrounded himself with a stable of trusted collaborators on both the Clean Lines EP and the album Permanent Daylight which is due out next year.

Partially co-written with the likes of Leyla Akdogan from L.A.’s Loch & Key and Courtney Totushek Brown, each of Athayde’s guests have left their own indelible mark before returning to the rush. Athayde’s music was forged in the production-orientated electronica scene in DC and with outside influences such as Brian Eno, Depeche Mode and Portishead, his meticulous sound explorations evolve from their skeletal beginnings until they oscillate and brim with layers. Imagine Trent Reznor’s film scores with an added focus on melody and songcraft. Named after an old animation contraption which projected a frame under a table so that the artist could trace over it and also a visual effects technique to remove objects from a background by cutting them out by hand, Rotoscope is a fitting moniker for a band that augment their own music with samples to create a continuously shifting sonic landscape.