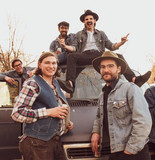 When a lifestyle creates a musical style, that music is authentic. So when we say that the Denim Daddies are creating their own form of authentic country music, you might feel a little bit confused. Do Shooter Mac & Bo Winchester actually use firearms? No. Does Merv Campbell actually drive a skid-steer? No. Is Rick Visser from Luckenbach, Texas? No, he’s actually originally from Manitoba. Rudiger Metsin traded in his cigarettes for a vape long ago, so how, you ask, can he write songs that sound like they stumbled out of a smoky barroom? Steady work on the craft, beer drinking, and breaking hearts, that’s how. These five good ol’ boys who now reside in Edmonton, Alberta, are finding ways to satisfy the tastes of both purists and newbies of the country genre, burning up every stage they grace with outlaw-inspired alt-country that parties as hard as they do. With tunes about hoedowns gone right, hootenannies gone wrong, and the pain in your heart after hearing a Luke Bryan song, they’re doing it on their own terms. Several old guys once told them that their sound was reminiscent of The Flying Burrito Brothers. A man with a mullet said they sounded like Steve Earl. Rick’s mom says they sound like Sweet Revenge era John Prine. Thanks, mom. Catch the Denim Daddies riding off into a sunset near you. They’ll be in their van of course. None of them can ride a horse.