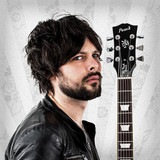 Matt Peach blends powerful no-nonsense guitar riffology with infectious vocal lines, his aim is to bridge the ever growing chasm between modern-pop and rock. His upcoming album Epiphany is his best work to date. Packed with fan favourites such as “Cut Out Teeth”, “Dreaming” and “Paris”, this album sees Matt return to his musical roots, grounded in folk, punk and rock. In Matt’s words “I’ve never made a record that is as true to myself as this, and I think it shows. It’s just me making a noise I like. There’s no reinventing the wheel here. It’s rock n’ roll and I’ve realised it doesn’t need fixing; it was never broken.” In late 2019, Matt donated stem-cell for a leukaemia patient via the Love Hope Strength foundation, the world’s leading music against cancer charity. This unlikely twist of fate came after Matt

released a song called “Now” in support of LHS 2 years previously. Now was produced by and featured Steve ‘Smiley’ Barnard on Drums (Lily Allen, Joe Strummer, Robbie Williams) and James Stevenson on guitar (The Cult, The Alarm, Kim Wilde, Generation X). His live stage show is a folk-punk assault on the senses, brimming with passion, angst and energy. "The most important thing is that everyone goes away from the show feeling a little better than when they walked in." says Matt. In 2016 his anthemic single ‘Rock n’ Roll Christmas’, won the Thomann International Christmas Song Competition and received international airplay.