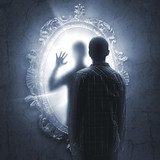 Vlad Meza Escorza, composer, vocalist and keyboardist from Hidalgo, Mexico, with a career of 16 years in Mexican scene and two albums with the prog metal bands Demon of the Fall and SupraKarma, presents his new project: MIRRORS OF VLACK. After a decade since their conception, and music composed through 17 years, arrives this new project with musical roots in Alternative Rock, New Prog and Metal, with elements of Ambient, Dark, Folk, Symphonic, Doom and Hard Rock; represented in nine songs (plus a cover traditional song), which musical diversity reflects the different stages of musical evolution of Meza Escorza in more than a decade and a half of presence in his scene. THE TURNING POINT: The Long Dark Road to a New Dawn is the title of their first album (and the third in their personal career): A musical ride across dark and melancholic, yet melodic, epic and passionate passages; a concept album about self-discovery, fall and redemption in life… all through a journey from twilight to starlight. THE TURNING POINT was mixed and produced by ANTAR AHUMADA (international certified engineer and national awarded sound artist) in Pachuca, Hidalgo, Mexico; and mastered by JENS BOGREN (Opeth, Katatonia, Moonspell, Sepultura, Anathema, James LaBrie, Symphony X, Dark Tranquillity, Amon Amarth, etc.) at Fascination Street Studios in Örebro, Sweden.