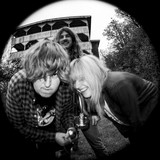 For some their years in school were worse than everything that followed in their later life. The foundation of the Garage-Band BIKINI BEACH in Constance, southern Germany tells us a different tale: founded after losing a local band-contest in 2013, Nils (voc, guit), Charlotte (voc, bass) and Manu (drum) kicked quite a few German asses during three tours and two LPs, proving that Garage-Punk still has something to say. Whether they’re playing a small gig for zero people in a squat in Holland (just to leave a bag with their used underpants behind), enjoying big breakfasts or pizza – you can bet your momy’s best cake that they’ll bring Death By Audio-Pedals and a whole bunch of loud and fuzzy guitars. For the new LP „The Fatal Consequences Of Masturbation“ the girlz and boyz pushed their fuzz to a different, cleaner level – just to blow you away with the sound of coffee machines and even more desperately banging Fuzzy-Buzzy-Garage-Punk.