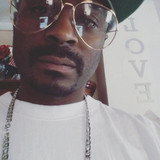 Nieman Marcus who use to go by the name Gansta Marcus is a well respected artist and producer living in the City of Lima, Ohio. Gansta Marcus represented a new form of music that had a sound that clashed with music fans from the beginning. Before the sounds of Migos and A$AP Rocky, Gansta Marcus and his crew was already turning up the music scene with hot hits like 'Million Dollar Swag' and radio's favorite '#1 Fan.' Gansta Marcus of Lima, Ohio is a well known unknown artist who was on the rise in 2010. With "Swag On 100" doing well over 100k free downloads, the producers first album release brought him to the forefront of his city. The 2010 album "419 To The 662" was a smash hit. Released: March 1st, this album sure brought Gansta Marcus name into the production world. With hit songs such as Overtime, #1 Fan, Bean City, and Im Sick, this album is great for purchase. After spending time behind bars, Gansta Marcus returns to the music industry in 2015 with his self titled album "Slick Rick". The Slick Rick album shows arrogance and strength in numbers as Marcus began to spread his voice throughout different cities. Released:

July 7th, 2015. On April 2nd, 2016 Gansta Marcus returns as the producer with the release of "The Vault". This was a surprise album released with various artist throughout Ohio and Mississippi. Featuring co labs from cities like Oklahoma and more.