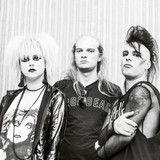 Created in January 2015 by Jacques Saph (Secular Plague, Masquerade, ex-Sleeping Children), Virgin in Veil is a deathrock band from Helsinki, Finland. Virgin in Veil released its first demo two months after the band came to life and started playing gigs in Finland as well as in nearby countries. A few months later, the band published a 4-songs e.p. titled “The Glory Hole“. Initially self-released on CD and quickly out of print, a 7” vinyl version of the record was subsequently released by Finnish label Fairy Dust Records in May 2016. After countless gigs in Europe, Russia, USA and Mexico, the four musicians were offered a record deal by Danse Macabre Records. “Deviances“, the band’s debut album, was released by the label in October 2016. Many more live performances followed, including a packed show at Wave Gotik Treffen 2017. A second album named “Twisted Thrills” was made available in September 2017 and the band continued its streak of concerts and performed three times in Tokyo for their growing Japanese audience. “Permanent Funeral”, Virgin in Veil’s third album, was released in April 2019 and received positive attention from fans and critics alike. Virgin in Veil work has been praised by notable music publications including Sonic Seducer, Noisey, Rumba and Cult Nation. The band has performed over 50 concerts in Europe, Japan, Brazil, Russia, USA, and Mexico.