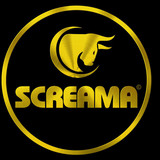 Screama was born in Birmingham England and grew up in the Winson Green area of the city. Screama is the youngest of three having an older brother and sister and was raised by his mother. He grew up without his father and explains not having his father around made him more determined to be a success. Additionally, avoiding the paths that under-privileged youths and peers more commonly followed, Screama found salvation through his interest and biggest passion – Music. Screama’s passion for music was founded through watching popular music television programs like Yo MTV Raps and the Soul of MTV, which spurned his interests in other music genres including Reggae, Indie, Neo-soul, Drum & Bass and Garage. Inspiration came in many forms for Screama, who describes 90’s hip-hop, RnB and soul as his biggest inspiration to date but was also heavily influenced by artists Tupac and Notorious B.I.G who emerged as iconic artists of that generation. Aged 13, Screama begun to get creative both lyrically and musically. It started in the school playground, ‘messing about’ Screama’s freestyle skills earned him credible feedback from peers which prompted a can-do attitude to be successful within the music industry. By 14 years old, a computer console game ironically entitled ‘music generator’ further fuelled Screama’s determination to make it; he started to write songs, make beats and produce hip-hop, soul and drum and bass music.