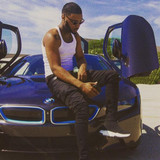 Zayden Stellar is a native of Milwaukee Wisconsin. The singer, dancer, performer and composer hails from a family of highly successful musicians that include music icons Faith Evans and Roger Troutman. His Father was a superior athlete & local music producer in the 1980s.   Zayden began rapping, singing and dancing at the age of 8. He states he was most influenced by watching the routines of Michael Jackson and Usher. By the time Zayden got to 7th grade, he was a veteran songwriter, writing his own songs and creating his own dance choreography. Needless to say he created his own fan base of loyal teenage girls.   Riding the wave of his popularity, Zayden took the next step and began to focus on his social platform as a way to distribute and showcase his musical talents. His YouTube videos of cover songs eventually began to garner him fans outside of his hometown and he began to buzz. Encouraged, Zayden started to record his originally composed music. Not long after Zayden released his first single on YouTube as a free song for just his family and friends. This video received over 100,000 views. It was then that Zayden reconnected with his former middle school teacher who began to guide his music career.  From this collaboration several opportunities arose including his performance opening for Billboard and Grammy Award nominee Big Sean, Multi platinum selling T.I and 3 time Grammy Award winning R&B Superstar R.Kelly. - Lisa Jackson