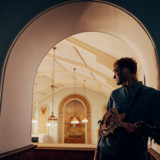 A virtuoso mandolin player, singer, composer, bandleader, and radio personality, Chris Thile is one of the leading lights of progressive bluegrass. He's a co-founding member of the Grammy-winning outfit Nickel Creek, and he's been at the forefront of bluegrass, creative folk, and roots music since debuting in the late '80s. As a leader, he has issued an array of acclaimed albums, including 2001's Not All Who Wander Are Lost, 2004's Deceiver, and 2006's How to Grow a Woman from the Ground. He is also a founding member of the inventive Punch Brothers, with whom he took home a Grammy for 2018's All Ashore. Thile also won a Grammy for 2011's Goat Rodeo Sessions, his genre-bending collaboration with cellist Yo-Yo Ma, bassist Edgar Meyer, and violinist Stuart Duncan. He has engaged in other ambitious projects, recording with pianist Brad Mehldau, banjo player Bela Fleck, and singer/guitarist Michael Daves. Between 2016 and 2020, Thile hosted NPR's A Prairie Home Companion (later titled Live from Here). Born in Oceanside, California in 1981, Thile grew up in Idyllwild in a musical family and first started playing mandolin around age four. It was while attending a weekly bluegrass show at a local pizza restaurant that he met the brother-and-sister duo of fiddle player Sara Watkins and guitarist Sean Watkins. Together, they formed Nickel Creek and recorded two albums before releasing their official debut, 2001's Nickel Creek. Produced by Alison Krauss, the album hit the Billboard 200 and quickly elevated the group's status as rising stars of the progressive bluegrass sound. With Nickel Creek, Thile released a handful of highly regarded albums, including 2002's This Side, which won the Grammy Award for Best Contemporary Folk Album, 2005's Why Should the Fire Die?, and 2014's A Dotted Line. On his own, Thile debuted with 1994's Leading Off... and 1997's Stealing Second. Largely traditional bluegrass productions, the albums were particularly impressive considering that he was only 13 years old and 16 years old, respectively, when they were released. They also found him backed by such bluegrass luminaries as Jerry Douglas, Stuart Duncan, Alison Brown, and others. That said, the albums were primarily showcases for his growing abilities as a gifted teenage performer. Thile began to come into his own as a solo artist with 2001's Not All Who Wander Are Lost, for which he took home the title of Mandolin Player of the Year from the Instrumental Bluegrass Music Association. He returned with 2004's Deceiver followed by his eclectic 2006 effort, How to Grow a Woman from the Ground. The latter effort showcased a backing band comprising Noam Pikelny, Gabe Witcher, Chris Eldridge, and Greg Garrison. The group officially changed its name to the Punch Brothers in 2007 and debuted Thile's epic 40-minute, four-movement suite, "The Blind Leaving the Blind," at Carnegie Hall. The suite, along with a handful of other tracks, was included on the group's 2008 debut, Punch. Also that year, Thile collaborated on a recording with acclaimed bassist Edgar Meyer. A second Punch Brothers collection, Antifogmatic, arrived in 2010, followed in 2011 by Sleep with One Eye Open, featuring bluegrass guitarist Michael Daves. Also in 2011, Thile collaborated with Meyer, fiddle player Stuart Duncan, and legendary cellist Yo-Yo Ma on The Goat Rodeo Sessions, which took home a Grammy for Best Folk Album in 2013. A further collaboration with Meyer, Bass & Mandolin, appeared in 2014. The following year, Thile was back with the Punch Brothers for The Phosphorescent Blues, which earned a Grammy nomination for Best Americana Album. In 2016, Thile was named as the new host of the weekly public radio variety show A Prairie Home Companion, replacing retiring host and co-creator Garrison Keillor. As part of his new role, Thile put together a house band for the program that included Punch Brothers bandmates Paul Kowert and Chris Eldridge, fiddle player Brittany Haas, drummer Ted Poor, and folk singer/songwriters Sarah Jarosz and Aoife O'Donovan. Despite his newly adopted radio duties, Thile remained an active performer and in January 2017 paired with jazz pianist Brad Mehldau for the genre-bending duo album Chris Thile & Brad Mehldau. He followed that April with Bach: Trios, an album of original arrangements of J.S. Bach keyboard pieces with cellist Ma and bassist Meyer. Thanks for Listening, a collection of studio re-recordings of select Songs of the Week written for A Prairie Home Companion, arrived in December 2017. Thile again reunited with Ma, Meyer, and Stuart Duncan for 2020's Not Our First Goat Rodeo, the follow-up to their Grammy-winning 2011 collaboration The Goat Rodeo Sessions. ~ Matt Collar, Rovi