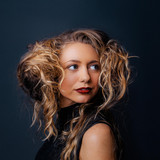 Ashtyn Barbaree is an internationally touring Indie-Americana singer/ songwriter from Fayetteville, Arkansas, USA. She has a smokey, yet silky voice often accompanied by an 8-string tenor ukulele. She started playing in bars regularly when she was only 15. Her debut album released April 2018 was recorded in Nashville, TN at The Butcher Shoppe Studio and has received national and international music reviews. November/December 2018 she completed her first full band European tour as an ambassador for The House of Songs, then February 2019 she represented Arkansas and The House of Songs at Folk Alliance International in Montreal, Quebec, Canada.