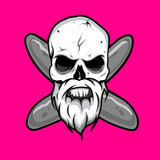 High energy, punk rock powerhouses Punk Rock Factory make easy work of their special brand of punk covers. Formed in late 2014 in South Wales, Peej (vocals, guitar), Benj (bass, vocals), Ryan (guitar) and Kob (drums, vocals), Punk Rock Factory combine everything you love about 1990s/2000s punk rock, and reimagine classic and hit songs like you’ve never heard them before. From Meat Loaf to Disney, nothing is off limits to them. The band rehearse, write, record, mix, master and film everything themselves in one dedicated space that they affectionately call ‘The Sausage Factory’ and have no problem bringing friends along either. To date the band has had singers from bands such as Protest the Hero, Bowling for Soup, Mest, Rufio, Ten Foot Pole, Ice Nine Kills and many more, provide guest vocals on tracks. Firmly cementing themselves as a punk rock household name. After their first album ‘The Wurst Is Yet To Come’ gained over 1.3m streams on Spotify and an explosion of interaction on TikTok and other platforms, the band got to work on their second album ‘A Whole New Wurst’, consisting entirely of Disney classics with their unique special sauce added. After only two months the album gained over 2.4m streams, reached #48 in the UK album download charts. https://www.punkrockfactory.com https://instagram.com/punkrockfactory https://www.tiktok.com/@punkrockfactory https://facebook.com/punkrockfactory https://twitter.com/punkrockfactory