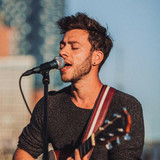 Igor Landy. French musician, singer and songwriter based in Hamburg, Germany. Igor was one of the talent in Fanta 4’s team on The Voice of Germany TV show in 2018. Leaving Paris in 2012, he moved to Germany to follow his passions: to write songs and to perform live on stage. His music drifts from soul over pop, to rock or electro, but always recognizable by his strong, soulfull and unique voice. After his debut EP "mynameishenk" in 2015, Igor published his first single Helpless in 2019 as Igor Landy. His next single « Happy again » is coming out on September 30th 2020. Igor Landy live on stage is always a party filled with catchy songs in a relaxed and upbeat atmosphere. Wether he’s playing solo on his loopstation or together with his band: he’ll always find a way to make you groove! More info and video: http://www.igorlandy.com www.instagram.com/igorlandy www.facebook.com/igorlandy www.youtube.com/igorlandy www.soundcloud.com/igorlandymusic www.twitter.com/igorlandy