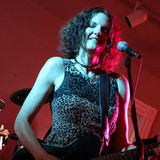 Jennifer Tefft is a fired up, energizing presence that pulls earthy music from its roots and breathes fresh, soulful, rock and roll life into them. Her music combines intense rhythms with melancholy textures and haunting vocals that wind easily from darkly ethereal to outspoken, creating her own brand of Gritty-Lush Alternative Rock. After getting her start playing for change in the subways and streets of Cambridge, MA, Jennifer Tefft met guitarist John Parrillo met and they quickly began writing and playing together as a duo.

Following several years playing the circuit in Boston and Cambridge, they released their first cd Dig This Thing along with bass player Jeff St. Pierre and drummer Phil Antoniades.