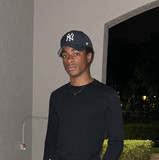 Recording artist Eazy.Walters dreams of changing the world using his music, and nothing will stop him from achieving this. Eazy.Walters was born in Teaneck, New Jersey and began writing music at the age of ten. With his raw sound & passionate lyrics he quickly made a name for himself, competing in cafeteria rap battles and performing at local talent shows. In 2018 Eazy.Walters released his debut single Pages of Pain. After seeing his music touch people from all over the world, he decided to continue making music. His inspirations are drawn from painful memories & real life experiences. He hopes the music he makes can help someone else going thru the same things he once did. He is currently working to release a lot of new music in the upcoming future, this is only the beginning.