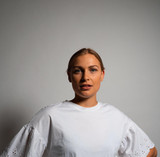 Hailing from Sandane, Norway, SOFIA was discovered at the age of 14 by the Oslo based music company Toothfairy. Gaining entry to Coucheron’s studio, SOFIA quickly became the singer and co-writer of Coucheron’s hit single “LOUD”, streaming millions and getting recognition from tastemakers such as Clash Magazine and CloudKid. Returning to Coucheron’s studio this spring, the time had come to work on SOFIA’s first pieces of original music. After months of grinding new sounds, SOFIA revealed her debut single “Fake It”.

The track was immediately picked up by Norwegian radio and was featured on the TV-show "Lovleg". VICE media's Nothing But Hope And Passion was also quick to highlight the artist as one of the most exciting acts coming out of Norway. SOFIA just released her new single "I Don`t Want to Lose a Friend"