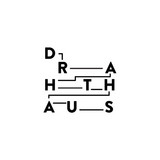 Drahthaus creates buildings out of sounds. The playful, at the same time intuitive as well as sophisticated musical architecture of the Viennese band merges labyrinthine constructions, geometric subjects and flowing forms into an audio-visual structure. An extraordinarily broad spectrum of musical influences is united under one roof. The building material forms traditional and innovative sound generators that interact in a productive symbiosis both in the studio and live on stage. Founded in 2015, the Drahthaus Kollektiv is an association of various creative people living in Vienna (musicians*, artists*, designers*, filmmakers*, technicians*, programmers*, craftsmen*, organisers*) with the vision of questioning existing structures and creating space for future innovation. The collective sees itself as an organization that aims to wire and rewire the abilities, interests, ideas and approaches of its members, followers and sympathisers to all sorts of constellations in order to deliver innovative output in the fields of art, technology, media and society. The beginning of all and still the heart of the collective is the band Drahthaus. Their first album is released in April - it has no title. But it will lift the electronics sphere out off its hinges. Local, national, international. Welcome to Drahthaus www.drahthaus.at Foto: Mateusz Wiglinzki